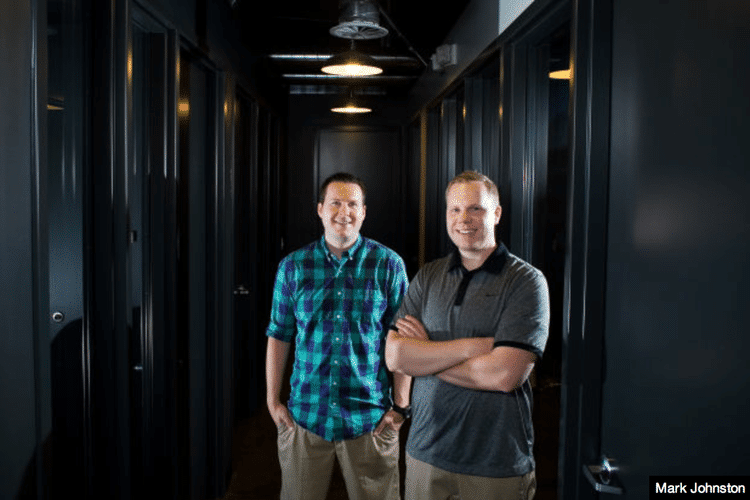 Weave in the News!!!

PLEASANT GROVE — Brandon and Jared Rodman could be fraternal twins. With the similarity in their appearance, mannerisms and most importantly, their apparent bond as a team, they are on the fast track for their young company called Weave.

Based in Pleasant Grove’s business park, Weave is a telephone company specifically designed for dental practices. But what does that mean?

All the family history, billing and other data is stored and available during a phone conversation to dental staff.

“They are going to be able to accomplish more with one phone call, offer a better patient customer service and hopefully create customer loyalty and better patient relationships,” he said.

The unique system also saves time. When the office phone rings, Weave’s program automatically launches a pop-up to identify the patient and patient-specific information, allowing the office staff to personalize each call with a conversation concerning billing, birthdays, well-being, appointments and names.

“All of these things will pop up automatically for them and they won’t have to say, ‘Hold on, who am I speaking with again?’ and then ‘Let me put you on hold, how do you spell your last name?’ ”

It wasn’t more than two years ago that the Rodman brothers made a hard pivot on their business from an appointment scheduling call service to the personal information service program for dental staff.

In November 2011, they installed the new system for their first client.

“OK, this is what we are doing now, there is no going back,” Brandon Rodman said they thought at the time.

“Installing for that first dental practice was really interesting. We thought we knew a lot. We had spent eight months or so developing and working on things, getting a prototype. We installed it in the first office and it didn’t work,” Brandon Rodman said.

They started at 6 p.m. after the dental office closed for the day and stayed through the night. By 6 a.m., it still wasn’t working correctly.

“We have learned that every dental practice, every one is different. Having worked with tons and tons of dental practices now we’ve seen almost all the scenarios,” he said.

They may not have seen all the possible setups yet, but he said he feels confident after installing so many that they can customize a system to every new situation.

“It was probably about six months before we felt completely confident to say ‘OK, here we go,’ ” Brandon Rodman said.

Since that first client, the business has grown from three full-time staff to 16, from eight part-time to 25. A big milestone occurred when the founders began receiving a regular paycheck.

“There were times when my wife and I didn’t know how we were going to pay our mortgage, our savings account had been drained, we had sold our cars, we were borrowing a car from a family member. To get through some of the hard times we withdrew out our retirement and put some back into the company,” he said.

Their commitment paid off and the founders were recognized as No. 12 in the Utah Valley Entrepreneurial Forum’s Top 25 under 5. That classifies it a startup to watch in Utah County.

“We were shocked by that, we thought we would never make it in there,” he said.

The business is scalable, meaning the company product can be scaled to other types of businesses, although that hasn’t happened yet, Brandon Rodman said. With more than 160,000 dental practices in the United States, they have enough to keep themselves busy for a long time.

Growing a startup has given the brothers confidence and resiliency that has been wrought through the test of building a business. They didn’t grow it alone, however.

“The company wouldn’t be where it is today without the support of our family,” Brandon Rodman said.

As a child, he said he never thought he would be an entrepreneur. If you had asked him as a kid, he wanted to be a baseball player or a cartoonist.

As he grew older, he got interested in dentistry. Part of the BYU dentistry program involved students shadowing a dentist.

“After doing that for a couple of hours, I decided I didn’t want to be a dentist anymore,” he said.

He stumbled across a call center software program and decided he would open a call center — but they had to have something to sell. About this time, he approached his younger brother.

“Brandon had come to me and said, ‘Hey, I have this great idea for a business. I already have some legs started here and I could use your help doing it,’ and at that point it was for a dental call service,” COO Jared Rodman said.

They worked in the older brother’s home in a room that was hot and stuffy.

“Honestly the way it started for me was as just a job for me and I helped out with a lot of stuff; and partly, he’s my brother — I’m going to help out as much as I can,” Jared Rodman said.

As the business began to progress, more and more opportunities became available for Jared Rodman. He pushed himself because he didn’t want the rest of the company’s staff to think his brother favored him. And for his brother, he was more comfortable pushing Jared Rodman because of their relationship.

When the brothers went home, they wouldn’t quit working. Jared Rodman would lie awake at night wondering what he could improve in their company. He said one thing they have fought to preserve is their company’s culture.

“We have been incredibly lucky to find amazing talent fresh out of school who are young and eager,” he said. Those on payroll are willing to do what they can to work as a team and grow the still young business.

The Rodmans have advice for those who want to try their hand at being an entrepreneur.

“Be extremely resilient. Everything is going to tell you are not going to succeed, most business don’t succeed; and I don’t think that you can go into it with that type of mentality.

“This was the hardest thing I’ve ever done in my life, everything is going to crash down around me, but I am going to figure out a way to get through everything,” Brandon Rodman said.

More on Weave can be found at getweave.com.

Cathy Allred covers 11 cities and towns in north Utah County and is responsible for Our Towns announcements. Send your school, civic, city and business news to [email protected] for Daily Herald publication. You can follow her blog at NorthUtahCounty.com.