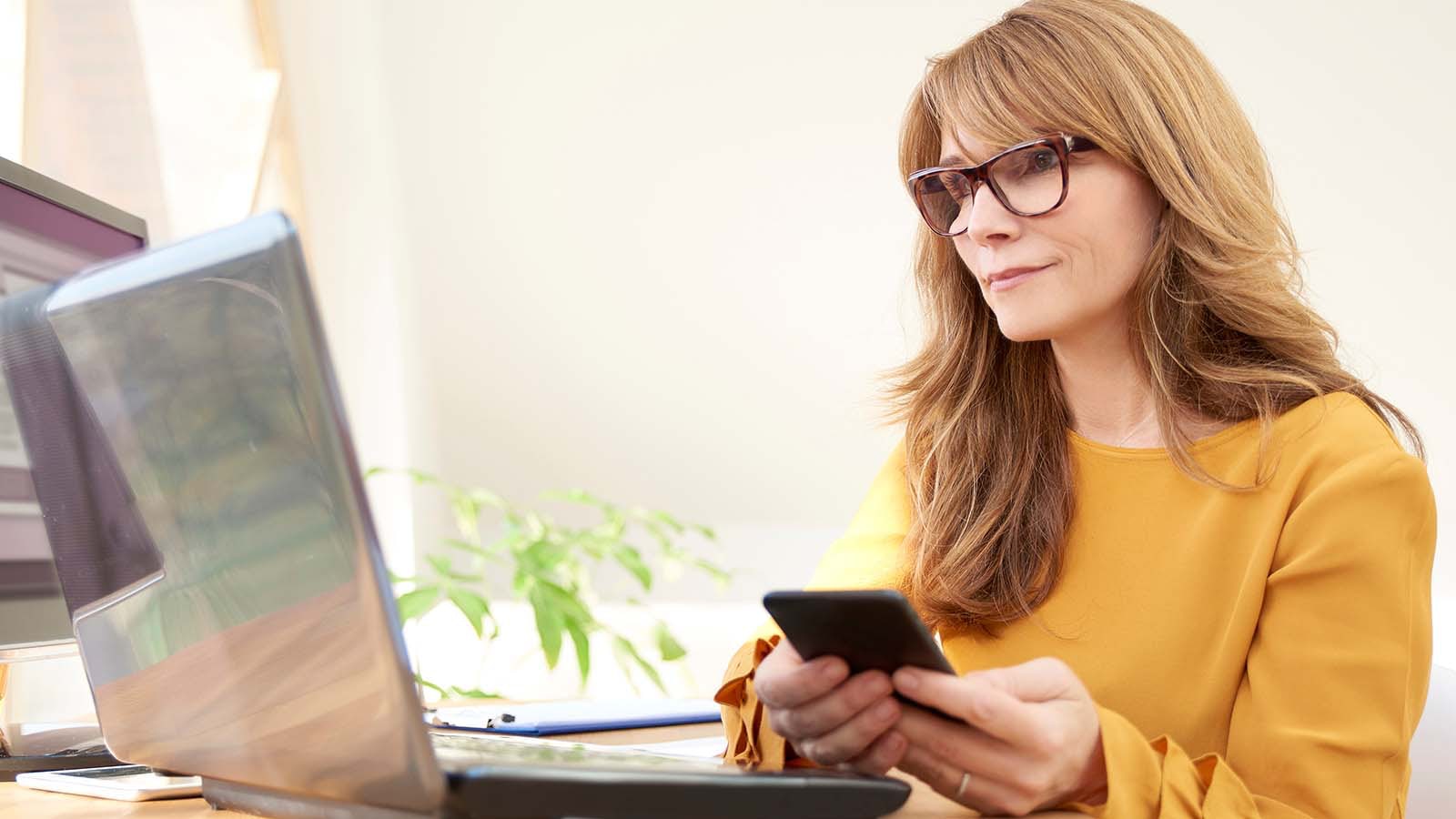 How to Schedule A Text Message on iPhone and Android Devices

Head of Vertical Marketing at Weave

Mobile phones have come a long way since the bulky, brick-like devices they originated as. Gen Z members watching 1987’s Wall Street would be hard-pressed to recognize the device held by Michael Douglass on the beach in that one iconic scene as a telephone, much less a fully functional cellphone. Nowadays, every single one of us carries around a computer infinitely more powerful than those that first sent men to the Moon. Aside from communicating with others, we can use our phones to take high-definition photos and videos, play console-quality video games, and broadcast our lives and hobbies to the entire world with the help of social media.

With all of the capabilities and innovations crammed into our devices, it becomes increasingly difficult to perform the simplest of tasks and find functions that should be right in front of our faces (unlike the pop-up notifications from Instagram while we’re at work, which are actually in your face, all of the time). One of these simple-but-hidden functions is the ability to schedule messages. Sending scheduled texts is a useful way to stay on top of your responsibilities before they’re actually due or ensure that you won’t forget about a close friend’s birthday, among other things.

So why is it so complicated to sort out on Android and iOS devices? Actually, while they may be a bit counterintuitive, there are quite a few ways to schedule text messages on a smartphone. From built-in methods to the best third-party apps this guide will help all Android and iPhone users schedule messages with ease and comfort.

Why Schedule a Text Message?

There are plenty of reasons why you might want to look into scheduling text messages, especially if, like many people in our increasingly distracted world, you consider yourself to be a little forgetful from time to time. The ability to send scheduled text messages out can be a game-changer when it comes to organizing your life, meeting business deadlines, or simply staying on good terms with your family. Below are a couple of real-life scenarios in which scheduled messages could come in handy.

You are a person who tends to remember someone’s birthday the day before the said birthday, but you barely remember they exist on the day of the occasion. With message scheduling, you can write up the message beforehand and make sure that it gets sent on time!

If you’re a manager in an office environment, chances are that you need to reach out to countless people on any given day. These people may only be available at certain times, and it often happens that your availability doesn’t align with theirs. To get in touch with them easily, simply schedule a text message for a time that you think they’re most likely to be near their phone to get a prompt reply.

Another business scenario: You work at a multinational corporation and need to coordinate with colleagues who live in another time zone, but it just so happens that their work hours are your sleep hours. Scheduling messages allows you to seamlessly communicate between time zones!

Regardless of your reasons, there may come a time when you just need to send a scheduled message and it seems like phone operating system designers have made it difficult on purpose. Below, you can find exhaustive guides on how to schedule text messages for both iOS and Android users.

Want your business communication to be less stressful?? Ask Weave

Stay on top of things with scheduled text messages

Weave lets you schedule personalized automated appointment reminders, so you can have more time in the day.

Can You Schedule a Text on iPhone?

There are quite a few ways you can go about scheduling a text message on iPhones, but in all honesty, the most convenient of them require you to download an additional application. Yes, you’ve read it correctly: we are well into the third decade of the 21st century, and iPhones still don’t come with a fully functional message scheduling feature built-in. There is a way to send pre-written messages, and while it can be useful on a handful of occasions, it likely isn’t what you’re looking for.

If you want to send a one-time scheduled message using an iPhone and would ideally like to avoid opening up the App Store, then, unfortunately, you’re out of luck. However, there is a way to send recurring messages from your Apple device, provided that it’s running on iOS 13.

Recurring messages are texts that are sent on a regular basis to a predetermined set of recipients. Using the Shortcuts app introduced with the iOS 13 update, you’re able to, say, remind your kids about their homework every single evening without actually remembering about said homework yourself. Or, you can use it to remind your co-workers about the weekly Monday morning meetings thirty minutes beforehand, so that they’re never late again! Follow the step-by-step guide below to learn how to use Shortcuts for setting up recurring texts.

Open the app and tap on Automation (at the bottom of the screen).

If you’ve never used Shortcuts before, you’ll have to choose the option that says “Create Personal Automation”. If you have, then you’ve simply got to tap on the “+” icon to add a new one.

In the “Time of Day” window, you can adjust the hour at which your message will be sent.

Find the contacts you want to send your texts to and press “Next”.

In the “Message” box, type up the message you want to convey. Tap “Next.”

Double-check if everything was set up correctly. If you want to get a reminder before the phone sends your text, turn on the “Ask Before Running” option, although in our opinion, it kind of defeats the purpose of a scheduled text.

The Shortcuts app also allows you to send something that is more resembling of an actual scheduled text message: a delayed time iMessage. The catch? It will only work when your phone is unlocked, so you can’t really use it to send texts while you’re asleep, or away from your phone.

In the case that you’re glued to your phone 24/7 (who isn’t these days?) and would appreciate this function, here’s how to set it up:

Go to shortcutsgallery.com and find the “Delayed Time iMessage” shortcut. Add it to the Shortcuts app.

Once it’s there, go to “All Shortcuts” and tap on “Delayed Time iMessage”.

Select the contact you want to schedule a text for.

Type up your message.

Choose the date and hour you want to schedule it for (remember to have your phone unlocked on that exact time).

All done! Your message is “scheduled”!

While Apple still needs to work on their text scheduling functions, third-party providers have done a much better job at providing users with the ability to send a text message at a scheduled time. Here is one of the best ones.

This is a neat little app with a downside. Like with all great things in life, you’ll have to pay to unlock the Premium version which allows you to automatically send the text message. Otherwise, instead of actually sending the message, it will prompt you with a reminder telling you that it’s time to send the text.

Regardless of whether or not you choose the free or premium version, the process of scheduling a text message with the Scheduled App is the same: add your chosen contacts, write up the text, and select the date and time. That’s it. If you want, you can also set up a recurring message.

Can You Schedule a Text on Android?

Although they may be more complicated when it comes to the user interface and design, there is no denying that Android devices have a lot more going for them when it comes to customizability and the whole variety of ways in which you can tweak a smartphone to make it truly your own. So this should hold true also when it comes to something as simple as a scheduled text, right?

Well, yes and no. Depending on the phone you’re using and the region you’re in, you might be lucky to have the “schedule message” function as a built-in feature. If you don’t, then you might have to pay the Google Play Store a visit in order to get exactly what you’re looking for.

If you’re using a Google Pixel or a Samsung phone, then there is no need for you to resort to a third-party application to schedule a text message.

On Pixels and any other phones with the Google Messages app pre-loaded as the default texting app, the scheduling feature is childishly easy. All you’ve got to do is open up the app and proceed to write a text, just like you normally would, but instead of tapping on the “send” button, you need to hold down on it. This will prompt a “Schedule Send” pop-up window, where you can choose to delay a message until later that day, or choose a date and time by yourself. That’s it, your message is scheduled!

The default messaging app on Samsung phones also comes with a scheduling function. In order to get to it, you need to open the application and proceed with writing a message and selecting the desired contact. Then, you should tap on the arrow to the left of the text field and select the “+” button. You’ll see a whole array of options, with “Schedule Message” being one of them. Once you choose it, you then need to set the exact date and time, and then press “Done”. Easy peasy.

The simplest answer to a question about the best third-party app to schedule a test message on an Android phone is: Google Messages. It can be downloaded from the Google Play Store on virtually any device running the Android system. If you’re looking for extra features, though, there is one application that we can wholeheartedly recommend.

This is an “all-in-one” scheduling app, as it also comes with a bulk sender (sending texts to hundreds of contacts at a time) and a reminder functionality, aside from the regular option of scheduling texts. Finally, our favorite function is the “fake incoming call”, which allows Android users to set up a phone call to a contact without actually using their phones!

Schedule Messages and Improve Your Business Communications with Weave

Using all of the options mentioned above will work just fine for one-off instances, but if you want a unified platform for all of your business communications needs (particularly useful for office managers) that not only allows you to schedule messaging or make appointments, but also congregate reviews of your business and be an overall easier way to reach out to your customers, then you should get Weave. It’s a platform that will streamline all of your operations with regard to scheduling, payment methods, and customer service, all with a single piece of software! Watch a free demo with Weave.